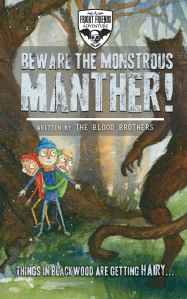 The second book in the “Fright Friends Adventures” series, Beware the Monstrous Manther!, is now available via the usual places. (You can find buying options here.) This isn’t a direct sequel to The House on Creep Street so much as it is a new adventure with our already established characters, along with some new ones. The paranormal tone of the first book is also gone, in favor of some slight science-fiction aspects. It’s pretty different and perhaps just a little bit darker, but obviously still kid-appropriate, being that my co-author and I aren’t total maniacs.

Synopsis:
There’s something fishy about Joey’s new neighbor – that old man named Carl White. Joey can’t help but notice his strange behavior… like those pet crates he carried into his house on the night he moved in, and those weird lights and noises coming from his basement window, and how he leaves his house late at night in his rusty old van. But Joey’s weird new neighbor isn’t his only problem. A friend from his past named Glenn asks him for help after his dog goes missing. And then Kevin’s cat disappears. Soon, pets all over Blackwood are vanishing and Joey has more questions than answers. Like, what’s with Barry’s new cat, Midnight? The one that can go invisible and walk on the ceiling? And what’s with those sightings of a creature described as half-man/half-beast? Does Joey’s new neighbor have something to do with it? Things start to get really hairy in Blackwood, and soon The Fright Friends’ curiosity is piqued. If they only knew curiosity killed the cat.