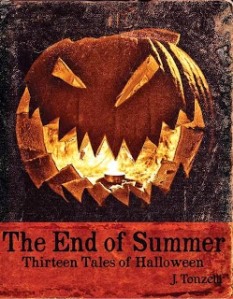 The End of Summer: Thirteen Tales of Halloween is a celebration of the day we all know and love. It’s pretty humbling publishing a collection of short stories with the same company that has released the official biographies of Kane Hodder (Jason from Friday the 13th Parts VII – X), Eileen Dietz (The Exorcist), and is working on the same for special effects genius/madman Tom Savini and A. Michael Baldwin of Phantasm fame. I can safely say that I will be in good company. As I explain in the book’s foreword, I personally felt there weren’t nearly enough anthologies out there that contained actual Halloween-related short stories, rather than those anthologies that just steal the word “Halloween” and cram it in the title, only to include stories about aliens or backwoods killers or whatever.

I’ve loved this weirdo day for as long as I can remember, and this book came together quite by accident. What began as simply writing random short fiction soon became an entire other thing once I realized that I, strictly on impulse, continued to set the action on Halloween. Once that realization hit, I had only one thought: “Well, let’s just keep going.”

And we’ve ended up right here.

The world’s oldest celebration comes to life in The End of Summer: Thirteen Tales of Halloween, an anthology that honors the darkest and strangest night of the year. Each story is designed to be intrinsically and intimately about Halloween—its traditions, its myths, and its effects—and they run the gamut from horrifying to heartbreaking. Halloween night is the tapestry through which a haunted house, a monstrous child, a late-night drive to a mysterious destination, and other tales are weaved. Demons are faced, death is defied, and love is tested. And not everyone makes it out alive. The End of Summer has arrived.
Buy it here!