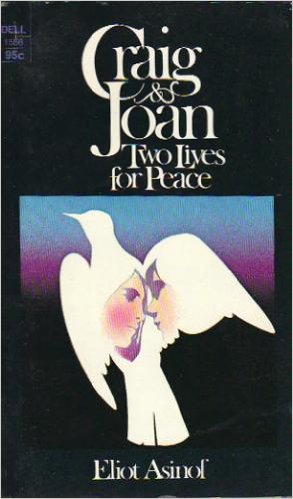 Craig & Joan: Two Lives for Peace tells the story of two very real teenagers – Craig Badiali and Joan Fox – who killed themselves on October 16, 1969, in protest of the Vietnam War. Their hopes were that their deaths would make people see that life is cherished and shouldn’t be wasted. For such a drastic decision, their message was that simple. Love, and allow yourself to be loved.

While already pretty tragic, that this happened in my hometown of Blackwood, New Jersey, really knocked me back. Joan’s family lived two blocks down, on the same street, from where my parents would settle only ten years later and where I would spend the first quarter of my life. Caig’s family lived not too far from where I attended church and catechism in my youth. The place where Craig and Joan asphyxiated from car exhaust in Craig’s car, Bee’s Lane, was less than ten blocks from where I lived, and eerily close to where I attended elementary school.

The author, Eliot Asinof, had begun marking history of this event for what was meant to be a newspaper article – as Blackwood was besieged with reporters and journalists for weeks following the revelation of this event – but as real life tends to do, the story began to grow and expand; as he talked to Craig and Joan’s family members and friends, he began to get a sense of who these kids were. And not only are Craig and Joan explored and fleshed out into the real kids they were, but 1960s Blackwood culture is also put under the microscope. The various political movements going on at that time, in support and denouncement of the Vietnam War, are recollected. (Craig and Joan were participants in both.) History on the town of Blackwood is also provided, including a bit about George Washington donating to have the very first church of Blackwood built – and it still stands there today.

Probably the saddest thing about the book – on top of the already sad event of the kids’ suicides – is how utterly clueless and ignorant the many different facets of Blackwood culture acted in response. As could be expected, some institutions blamed Craig and Joan’s suicide on drugs; others claimed it was that hippie culture so much of the youth had been embracing. It was frustrating to read so many sources condemn this act but then dismiss it with a red-herring cause conjured strictly to lessen its importance or impact. And it’s especially frustrating when you read that the kids prepared specific suicide notes – a dozen each, if not more – and were intended for very specific people, and which very explicitly spelled out why they did what they did. Except for one or two, those notes have never been made public, nor even delivered to their intended recipients. That two non-hippie kids from normal, blue-collar households would willfully take their lives in an effort to achieve some kind of peace didn’t make any sense. The school system didn’t understand it, nor did their parents, nor did law enforcement. Disgustingly, the church didn’t even care, and one particular representative seemed intent on exploiting the family’s tragedy in an effort to get more people to attend his services – and to push the agenda of the church as much as possible

Craig and Joan: Two Lives for Peace is nearly thirty-five years old, and if there’s one thing to learn about our world after reading it, it’s that nothing changes. The obvious answers to so many of society’s problems are staring us all right in the face – folded cleanly and placed into envelopes with their recipients’ names clearly labeled. But because of one body’s decision to withhold the key to unlocking the whys of Craig and Joan’s fate, the world will always wonder. Their suicide notes are likely still sitting in an evidence room, perhaps in the Chews Landing Police Station.

Make no mistake that these kids were quite real. Their letters may have never been delivered, and their ultimate motivations behind their suicides may never be fully accepted, but they existed. They grew up together, loved together and each other, and are now interred next to each other in the Church Street cemetery in the same town where they grew up. Together, they shared their lives and their deaths – and their tombstones bare the same date on which they made the ultimate sacrifice for our benefit: October 16, which, in case you haven’t noticed, is today.

Craig and Joan: Two Lives for Peace is a sad and frustrating read, but also incredibly open and honest. And for a non-fiction book, it has the most gut-wrenching final line you’ll likely ever read – proof that history does, indeed, repeat itself.